A few days ago I received my first order from UK artist Janet Granger, who designs and sells an amazing range of 1:12 scale needlepoint kits for everything from firescreens to rugs to bell pulls.  I had been looking for suitable cushion patterns for the little Queen Anne settee that Kris Compas made for me, and decided to pay for a kit, partly for the convenience, but mostly because I really liked the design. 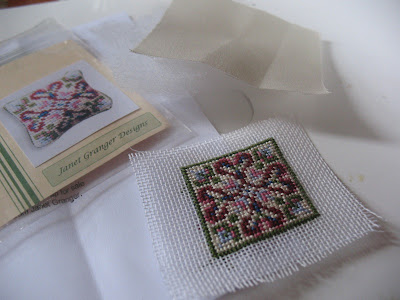 I ordered "Sophie", a Georgian patterned cushion that I hoped would go well with the pretty fabric that Kris supplied.  It came beautifully packaged with everything required and stitched up quite quickly on 22 count canvas (in spite of my inevitable mistakes).  I think it's even prettier in person than it was on line -- thanks for such a lovely design, Janet :) 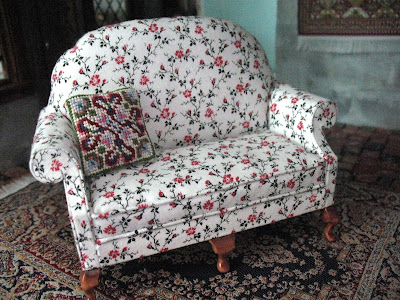 I also ordered a Willow patterned bell pull for the new house.  I doubt if bell pulls just like this one were in common use in the early 1700s, and I know for sure that the Willow pattern is later than my period, but I want to have a room dedicated to blue and white export ceramics, and just couldn't resist it! (To hell with rigorous historical accuracy!) It's on 32 count silk gauze, and comes with a cast metal bellpull end.  I'll do this one sometime later, when my eyes are feeling brighter! 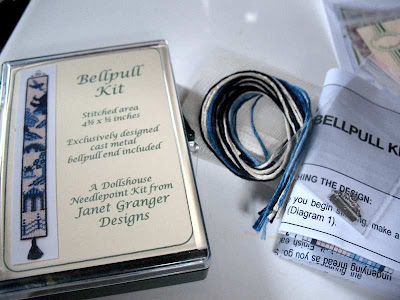 Posted by The Dangerous Mezzo at 12:06 PM