Hello!  David and I are in the Royal George in Staithes at the end of a lovely day. Bless them, they have wireless internet here!  I've got a pint of cider and I'm just going to post a bit about the topic dearest to all our hearts, MINIS!

I had an AMAZING time at The Miniature Scene in York on Saturday!  For everyone who told me what a wonderful shop it was, I just have to agree :)

We parked near the Black Swan in York, leaving Mum comfortably ensconced with a pint while David walked up to Monk Bar Model Shop and I walked across to Fossgate.

Friendly, knowledgeable people and a really marvellous array of minis, it was a dream come true!


Here are some photos from the inside of the shop: 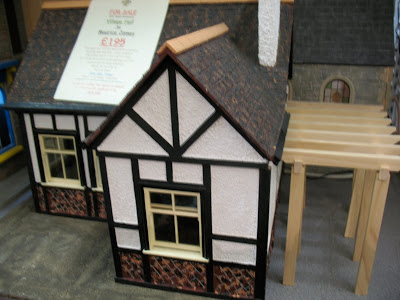 As soon as I get a chance I'll take some photos of the pieces I bought here and in Chesterfield!
Posted by The Dangerous Mezzo at 6:00 PM 6 comments:

Just a quick note before we leave Chesterfield and head for York.

We had an uncomfortably cramped flight via Thomas Cook yesterday, and were blessedly happy to get to Gatwick and get off the damned plane.  No problems picking up our car, connecting with the lovely fellow who brought Mum's oxygen concentrator to the car rental place and then we were on our way to Chesterfield.  This time we split up the driving rather than David driving the whole thing, which was much smarter!  We stopped at a break station where we ALL drank incredibly strong coffee, (even I, who almost never drinks coffee) which helped wake us up!

We were in Chesterfield around noon, at the Olde House Pub and Hotel, where the wonderful proprietors let us into our rooms early -- this is a great place to stay, very welcoming! Several pints later, we felt pretty much refreshed :)

David and I left Mum to rest, and, after a shower, we headed into the town.  First stop, Dolls House Gallery, where I picked up so many lovely little things, including a really stunning chandelier for the WAM House -- photos tomorrow, I hope!

Walking in the brilliant afternoon sunlight through the grounds of the house, I felt so happy to be in England.  What always strikes me on arriving in England in the spring and summer is how incredibly green the country is.  There was no better place to appreciate this than Tapton House Park yesterday :)
Posted by The Dangerous Mezzo at 4:44 AM 2 comments: 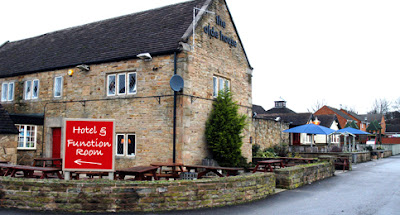 We're waiting in Halifax Airport for our flight to England!  I'll never get over being able to get on the internet in public places, it seems so improbably futuristic, somehow :)

As always happens, I got most of the things done I needed to, and the ones I didn't get done will turn out not to have been so essential after all, I guess.  I have some very light reading and some chocolate and a book of Sudoku puzzles and am looking forward to the flight!

The building in the photo above is our first stop, the Olde House Pub outside Chesterfield, where we'll spend tomorrow night.  It's the same place we broke our journey from Gatwick to Staithes last year, and we're comfortable there.

So the next time I write, we should be in Chesterfield!
Posted by The Dangerous Mezzo at 4:56 PM 7 comments:

You know how time seems to run more quickly when you're trying to get things done before you go away?

I'm in that stage right now :)  It's compounded by the very strange election we just had in Canada (a far-right party was just given a Parliamentary majority by only on 40% of the voters, our left-of-centre party had its best showing ever, forming the Official Opposition, we elected our first Green MP, and the "natural" governing party was reduced to third place.  Strange times, indeed).  Add in the fact that I have two big productions coming up for my opera companies -- Madama Butterfly in June (for which I'm singing Suzuki) and Tales of Hoffmann in July/August (for which I'm stage director) -- and my stress level is pretty high.

I'm a little overwhelmed, to tell the truth!

So I'm writing press releases, and packing, and having production meetings and rehearsing and all the while I'm thinking, "Just a few more days, and (d.v.) we'll be in England and sitting at a pub and reading about someone else's political woes!"


We're going back to North Yorkshire to stay in Staithes again, this time with my Mum.  I've got only two dolls house shops to visit this trip, and I'll see them both in the first two days :)  But we're going to have a lovely time and see David's marvellous family again, and I will be VERY glad!
Posted by The Dangerous Mezzo at 8:55 PM 6 comments: