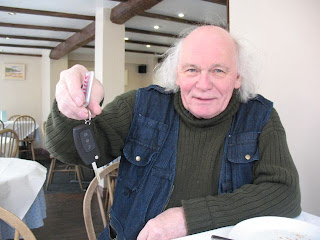 After a lovely day at Barnard Castle on Monday, we went to Whitby on Tuesday and DIDN'T LOSE THE CAR KEYS.  This is quite an accomplishment.

I had heard a rumour that there was a little place to buy dolls house items in Whitby, and I found it in the Shambles Market in Whitby Marketplace.  It's called Angel, and has a small selection of mostly standard Dollshouse Emporium items.  I was able to get a few pretty prezzies for my dollshouse club friends as well as good deals on electric candlesticks.

Yesterday was a quiet day for me while David went out to photograph some of the trains at the North Yorkshire Moors Railway.  Later on I tap danced with the Easington Tappers! I think for next year I'm going to buy proper tappy shoes and really give this my serious consideration :)

Today we drove down to Hull to see a friend, stopping in Scarborough on our way down.  We were able to visit two brilliant shops here:  The Train Shop (where we picked up our first N scale loco and carriages) and, just around the corner, Box O' Trix, which sells some very special dolls house minis.  This is well worth a visit if you're going to be in Scarborough. 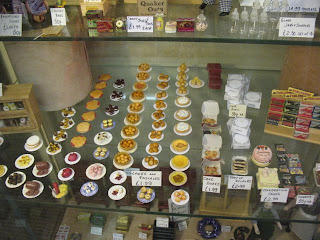 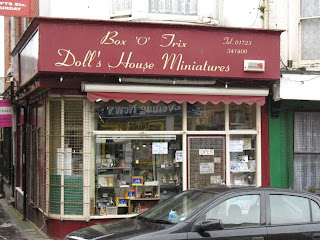 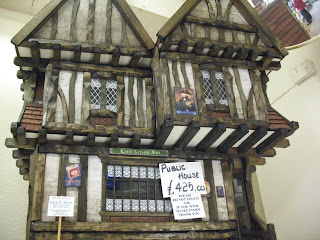 I picked up quite a few blue and white pieces, plus some very special little oddments, including a display of packets of pork scratchings for our pub!

Tomorrow is our last real day in England before we spend all Saturday travelling.  It's been such a great trip, and I'll try to post some photos of my buys once I get home!
Posted by The Dangerous Mezzo at 4:51 PM No comments:

Saturday we drove up to Ormesby Hall, just south of Middlesbrough.  This 18th century house has a very Queen Anne exterior, but is much more mid century fashionable inside. It has been the home of the Pennyman family for almost 400 years and is only open on weekends. 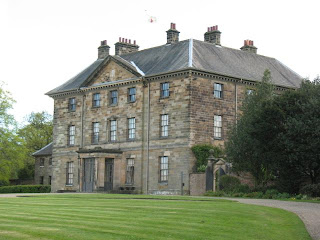 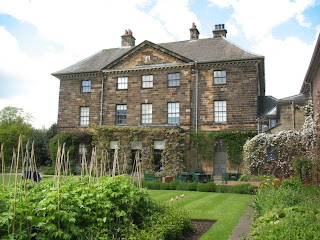 The stable block is grander than the house, I think!  It's now the home of the Cleveland Mounted Police. 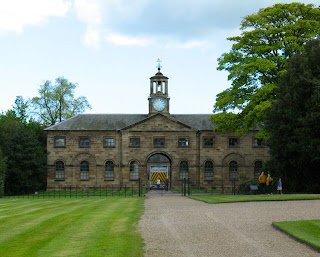 We weren't allowed to photograph the inside of the house (I suppose because people actually still live here :))  It's a shame because it's a perfect, rather shabby country house in an ideal scale for dolls house reproduction.  It's not a really big house, but has lovely ceilings and some stunning collections.  The attics now house several large model railway displays, which delighted David!  Well worth seeing.

On Sunday David had a bowling lesson at the bowls club, and then we had dinner at Kerry and Steven's where we had another superb meal (with Chris's imported yorkshire puddings :)) and the always-stimulating company of Anna, Eve and their giant dog, Max!
Posted by The Dangerous Mezzo at 6:33 AM No comments:


Had a lovely day in Great Ayton yesterday with David's cousin Rachel and her husband Martin!  We had a walk through the pretty village (the birthplace of Captain Cook) to The Buck where Martin and Rachel took us to lunch.  We had such a good time, in spite of the rain :)

The Captain Cook pub in Staithes

It was a very wet day on Thursday, and David and I slept in, then grabbed the papers and went out in search of a pub to read them in.  We tried a couple in Loftus, one was rammed with folks and the other was clearly hosting a wake!  We then moved on to the Captain Cook Inn at the top of the town in Staithes.

We love this pub.  The big Victorian pubs have their admirers, but I prefer a country pub.   I know the Captain Cook wouldn't be everyone's pint of bitter -- it's shabby and dark -- but it's comfortable, is a great place to spread out ones papers and relax, and best of all, it has GREAT beer and cider.  David had a pint of a guest bitter and I had some tremendously strong and delicious cider. 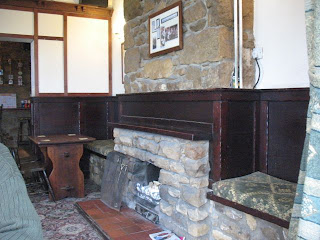 The tables, shown above and below, would be great for the do-it-yourself 1:12 scale pub builder :) 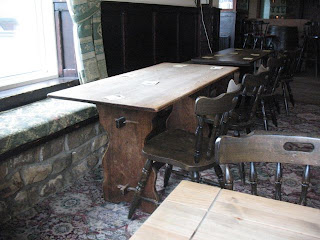 And in the corner they even have a 1:12 scale pub of their own! 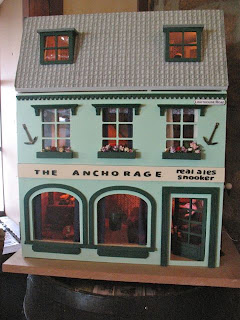 Then we came home and watched bad television until we passed out from exhaustion :)

A lovely day at Saltburn-by-the-Sea

On Wednesday David's cousin Tony and his wife Pauline took us to see Kirkleatham Museum near Redcar and gave us a personalized tour of Saltburn.
This is the very good local museum for the Redcar/Cleveland area, which has tons of great exhibits, especially one for the burial hoard of a Saxon princess.  It's housed in a beautiful 1709 Queen Anne building that was built originally as a school.  (Everywhere I go this trip I seem to visit William and Mary/Queen Anne buildings built of red brick with stone quoins :))  David took some wonderful detail photos of the quoins and bricks for me to use as reference photos.


Then we drove to Saltburn where Tony and Pauline gave us some background information about the wonderful murals that their son and daughter-in-law, Derek and Helen, created to mark the 150th anniversary of Saltburn's founding.  (It's hard to pick a favourite, but if I had to, I'd choose the panel in the photo above. I can't resist the sheer beauty of that donkey :)) 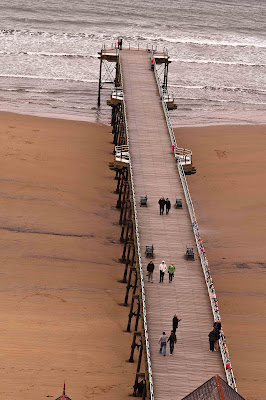 We headed to the Marine Parade for a great view of Saltburn Pier, and then I took the Cliff Lift (or funicular) down to the lower promenade: 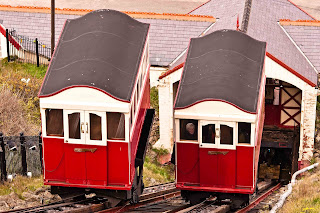 Pauline and I hit the arcade and played the penny fall machines until the men showed up for our walk on the pier. 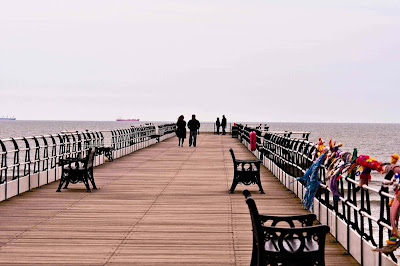 The colourful things on the right hand railing of the pier are seriously adorable little knitted Olympic athletes!


Then dear Tony and Pauline took us out for the best fish and chips I've ever had in England at the Seaview Restaurant by the pier.  This restaurant has the most incredibly glam decor -- it's all white and leather and silver and very Hollywood :)

A wonderful day, all thanks to Tony and Pauline Mosey!
Posted by The Dangerous Mezzo at 5:18 PM 1 comment:

Had a wonderful time on Tuesday in York.  We drove down to Pickering and then across to York, arriving around 11 am.  We went first to The Miniature Scene and I bought lots of little things for my projects.  Here are some of my photos from the shop: 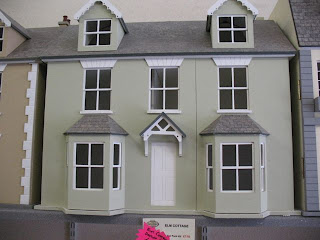 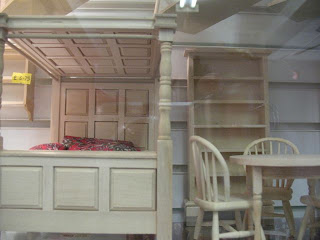 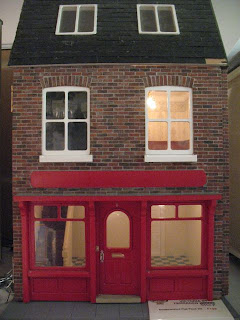 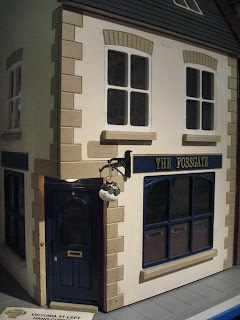 Then we walked through the Shambles, by the Minster and to Monk Bar Model shop where we bought a kit to make a 1:12 scale 1930 Bentley, which David is going to make and we're going to park outside the pub :)

Then we made our way back to the Black Swan for a few pints. 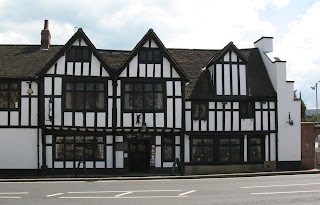 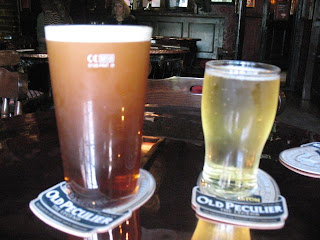 We drove up to Kirkbymoorside, passing through the large grounds of Castle Howard.  We crossed the moors on the beautiful road which runs between Hutton-le-Hole and Castleton, stopping at The Lion at Blakey Ridge for a pint and the papers. 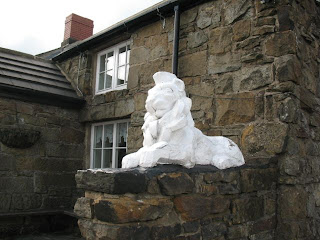 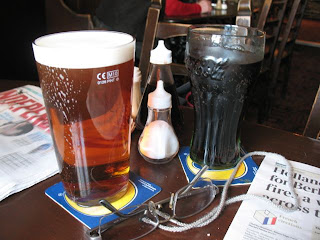 It was such a beautiful, sunny day and we had an amazing time!

Posted by The Dangerous Mezzo at 5:07 PM 2 comments:

We did a little recce around the town of Saltburn by the Sea yesterday, taking some photos and getting a better sense of this small Victorian era resort town.  We intend to start an opera workshop here next year and David was concerned that he be able to advise future participants about the pubs :)  Of course we're also researching possibilities for the interior of the 1:12 scale pub we're going to build!

We started with The Marine, on the Marine Parade overlooking the North Sea:

This is a grand, traditional Victorian pub, and although it's not the style I want to recreate in miniature, David spotted the simple construction of the round wooden tables, which will be easy to replicate in 1:12 scale: 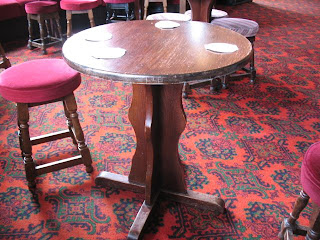 Then we moved on to The Victoria, in the centre of the town. 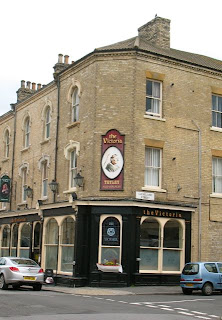 I loved this pub.  Fabulous atmosphere and if I was going to recreate a high Victorian pub, this is the one I'd choose.  Look at the light fixtures -- they're divine! 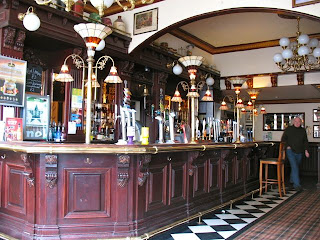 Then we completed our three pub day with a pint at one of our very favourite local pubs, The Fox and Hounds in Dalehouse near Staithes. Sorry the photo is crap -- this back room is lovely and dark and my camera didn't like it :)  But the hammered copper table top would be fun to do in 1:12 scale ...

We're off to York this morning, to visit the dolls' house shop and the model shop.  More soon!
Posted by The Dangerous Mezzo at 5:15 AM 2 comments:

We're waiting at the airport in Halifax for our late night flight to England!  This time we're flying up to Newcastle tomorrow and motoring down to Staithes from there, which should save us a LOT of driving, overall.

We hope to have a relaxing weekend and Bank Holiday Monday, and then drive down to York on Tuesday, to visit Monk Bar Model Shop and The Miniature Scene.  We're going to pick up a 1:12 scale Bentley model kit (which will be parked outside the pub which will be my next big project).  I'll also be looking for bits and pieces for the pub and for the apartment above it.

Posted by The Dangerous Mezzo at 9:11 PM 2 comments:

Stunning presents from France by Latchkey and Jonquil!

I am simply over the moon about some beautiful gifts that Jonquil sent me from France.   They arrived today, each one in its own little box covered with illustrations :)

First is this corset, covered with tiny, perfect embroidery.  This photo cannot do justice to the work that has gone into this piece, or its true perfection from every angle.  It's also beautiful.  I love it! 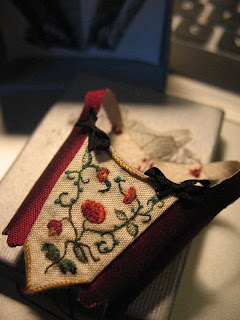 Jonquil also made me this fontage headdress -- very typical of the William and Mary period -- on its own tiny wig stand!  Gorgeous and period-perfect! 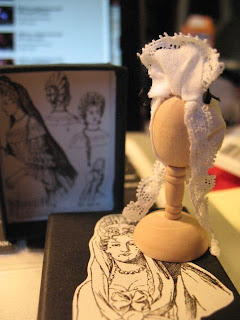 Jonquil, thank you so much for such perfect and beautiful presents, the gifts of your own hand and mind.  I am moved beyond words!


If you haven't investigated Jonquil's blog, please do visit.  She's having a very generous give away of one of her pieces of exquisite embroidery until the middle of the month!

Posted by The Dangerous Mezzo at 8:24 PM 5 comments: