After I finished the big jousting tapestry my fingers still seemed a bit itchy, so I stitched up a small vertical piece designed to be hung between windows.

This Tudor pattern comes from Sandra Whitehead's book Celtic, medieval and Tudor wallhangings in 1/12 scale needlepoint.  I worked it over three and a half days, which made a pleasant change from working on something that took 2 and a half months :)  I changed a few colours and stitched it on 26 count linen with two strands of cotton floss. 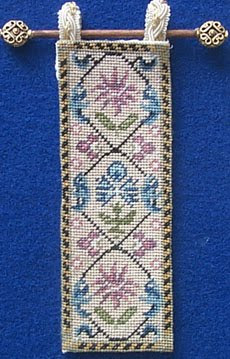 It now has a home between the two windows on the main floor of the tower: 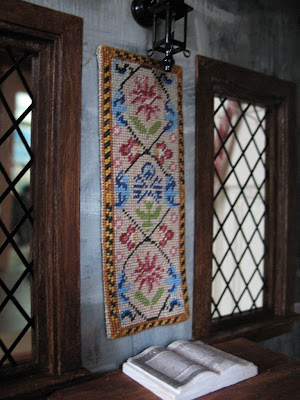 Email ThisBlogThis!Share to TwitterShare to FacebookShare to Pinterest
Labels: do it yourself, embroidery, miniature, needlepoint, tower

Here's what the Tower is looking like right now.

The main floor is right where it was a few weeks ago, with the addition of a light between the two windows (I installed that for our Christmas At-Home party on Dec. 20). 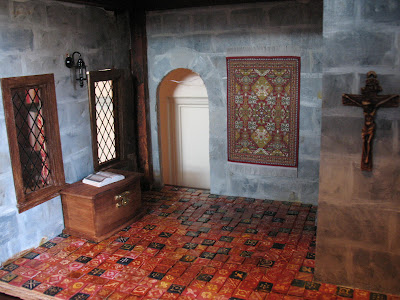 The first floor, the Library, has its floor installed, the walls stained and the stairway, railing and bookshelves roughed in.  I have to install the panelling and glue everything together, but it's coming along.  The floor looks great -- Eva scored it with a pen to mark out the wide, uneven floor boards, and then we stained it. 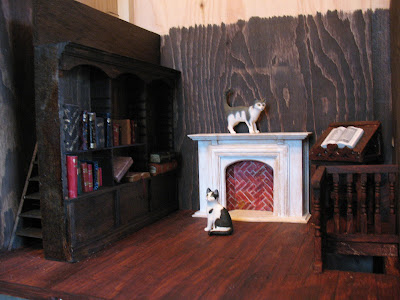 Posted by The Dangerous Mezzo at 4:32 PM No comments:

The kids and I decorated the Great Hall for the holidays, and here's what it looks like:
Tiddles hung the garlands (made from lengths of artificial amaranthus sprays from Michaels and clusters of small red seed beads) using Museum Putty. 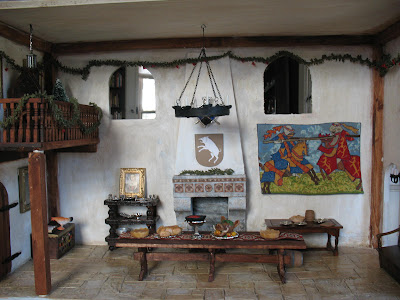 The minstrel's gallery features a lute (bought via eBay) and a lovely viol da gamba (made by Fred, who's studying violin).  There's also an anachronistic Christmas tree :) 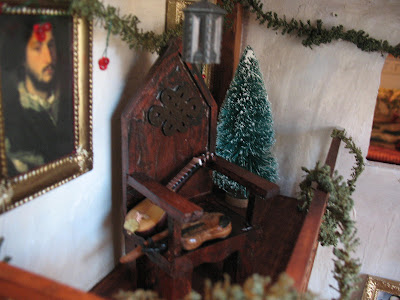 Fred also made the bowl of wassail on the table, next to Tiddles's boar head!  The table runner is a length of fancy trim bought at Designer Fabric in Toronto. 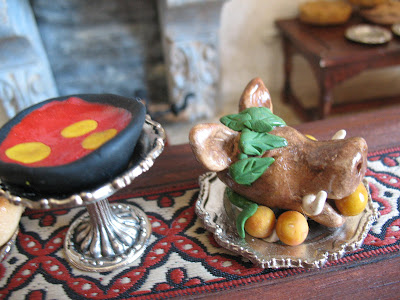 I made a roasting suckling pig on a spit, with andirons, a brick hearth and a drip tray, all created from polymer clay according to the directions in Sue Creaser's amazing book Food displays. 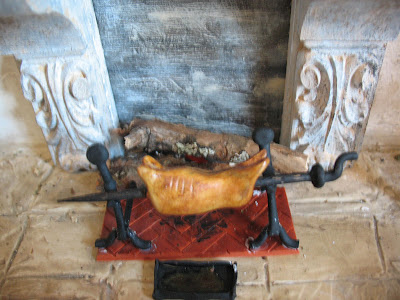 The court cupboard is groaning with treasures: 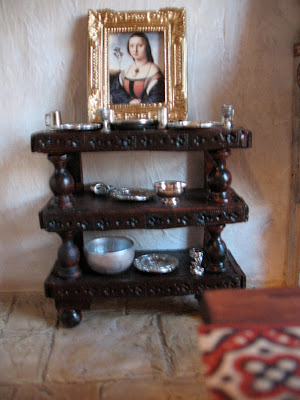 And last, but not least, I finished my immense embroidered tapestry of two knights jousting today!  I'm SO happy to have this finished -- I've been working on it since mid-October! 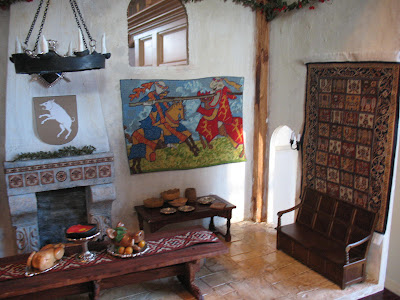 A Happy Christmas to all!
Posted by The Dangerous Mezzo at 8:16 PM No comments: 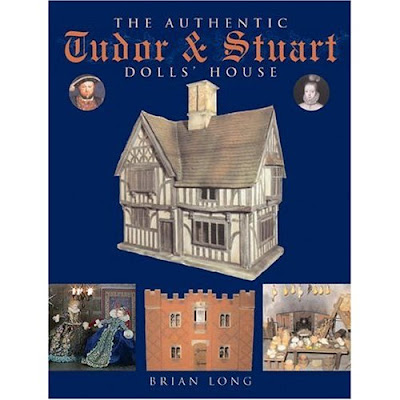 My copy of Brian Long's book, The authentic Tudor & Stuart doll's house, just arrived in the Christmas Eve post, and what a marvellous Christmas present it is!

While there are super projects in this volume, it is principally for inspiration and reference, giving authentic examples of real Tudor and Stuart details of nearly every part of a house, inside and out.

Certainly the most detailed and in-depth book I have on the subject, and I recommend it highly to all!
Posted by The Dangerous Mezzo at 3:24 PM No comments:

One of the most absorbing aspects of this project, besides the hand work required, which I enjoy, is the research needed to come up with a miniature and theatrical version of a medieval dollhouse castle being lived in by early Tudor-era people.

Learning about medieval flooring has been a real pleasure, and I'm terribly happy that my miniature tile floor is all finished.

Overall, I'm pleased with the effect, particularly from a distance.  Close up, one can tell that the owners of this castle hired blind apprentice tile makers back in the 12th century :)

I think I'll make that part of the story ... 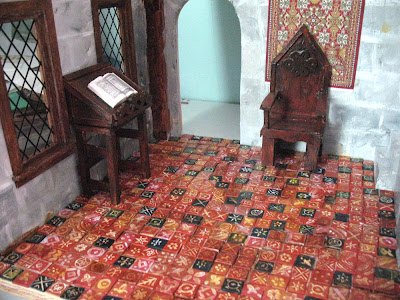 The yellow ochre glaze I used really helped to tie things together.  Then I used a burnt umber glaze to pick out some of the tiles and to muddy things up a bit in general. 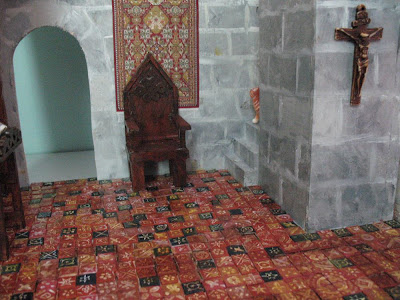 There's no grout.  There perhaps should be -- some of the gaps are pretty big! 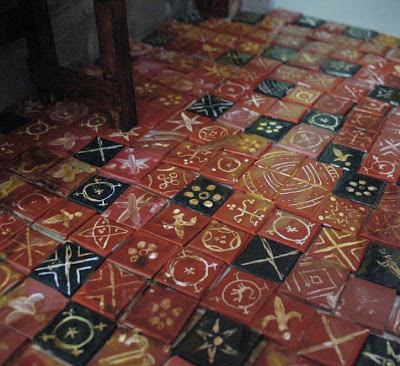 Before I put in the first floor of the Tower, I need to finish the flooring below.

At first I planned to put in a  black and white chequered floor, made from peel and stick tiles.

But after sketching it out, I decided it didn't look period enough, so I went in search of possible flooring options for 12 century English buildings.

I came up with encaustic tiles. 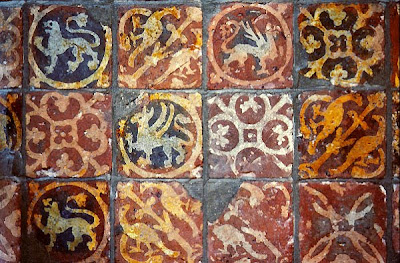 These tiles were made all over England from the 12th to the 16th centuries.  The word "encaustic" comes from the Greek, meaning "to burn in" (hence its relation to encaustic painting, where the pigment and beeswax combination are melted onto the canvas).  The raw clay tile was  stamped with a wide variety of patterns and the impress was filled with a white clay slip.  The whole was then fired and glazed with a characteristic yellow glossy finish. Each tile was typically about 6" square.
I've decided to make mine out of polymer clay.  In scale they will each be about .5" square.  I need over 600 of these little suckers.
For my first batch I made up my own terra cotta colour from brown, white and red clay.  Then I discovered the "pottery" colour of Sculpey clay, which is just perfect for these!  That's fine, I like some variation in the base colour, which I think will improve the effect.  Detail always does.
I tried a number of techniques to make the tiles:  I rolled out flat sheets of clay and then baked them, and used a guillotine to cut half inch strips, then cut the half inch square tiles.  This was VERY slow and quite wasteful of clay!
A much faster way is to roll out the clay, and then cut out strips and the individual tiles using scissors.  This is surprisingly easy, especially when one's eye becomes accustomed to estimating the correct size.  It's also easy to pull out all the tiles that are obviously the wrong size or askew, before they've been baked, and just junk them back into clay, thus reducing waste.
To mimic the white slip pattern, I used a small paintbrush and thinned acrylic paint for the first batch, which worked out okay.  The second batch I used a Gelly Roll pen in white, and this gave me much more control over the detail in the tiles.  For the finished floor I'll mix the painted and "penned" tiles up, but another time I'd just start in with the pen.
I'm not trying to make a particular pattern on the floor, so I'm using just about every design I can find for these tiles, and mixing them up. 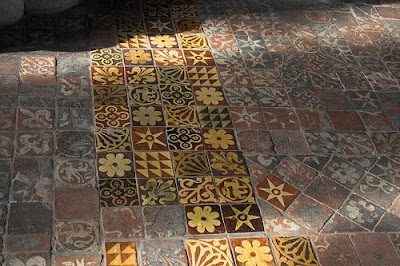 Some of the floors include tiles in a darker colour, what looks like a very dark blue, but is probably black.  I'm making some dark blue tiles to break up the mass of terracotta coloured tiles, and I'll play with the layout to see whether I want to put these in a band around the room or just mix them in with the clay coloured ones.  I mixed the basic Sculpey blue 4:1 with black to get a dark blue.

Here are some of my tiles: 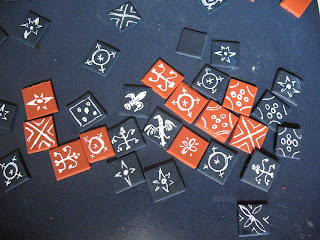 Posted by The Dangerous Mezzo at 3:12 AM 5 comments:

Email ThisBlogThis!Share to TwitterShare to FacebookShare to Pinterest
Labels: do it yourself, floor, polymer clay, tiles, tower, tutorial

"The boar's head in hand bear I, bedecked with bays and rosemary!"

Yesterday the kids and I worked on the castle a little bit, among other activities.  Tiddles decided to tackle the Boar's head on her own.  She worked from the basic description in Sue Heaser's wonderful how-to book "Food displays", part of the  Dollshouse Do-It-Yourself series.

Tiddles used the instructions in Heaser's book as her jumping-off point, but was gently critical of the way Heaser's boar's ears looked.  Tiddles knows a lot about pigs, as she's been taking care of her farm's pet pig, Griselda, from the time Griselda was taken in as a runt to be hand reared.

At the end we decided to add tusks, to make the boar look more fearsome -- I mixed the clay from half white and half translucent, and Tiddles arranged the tusks in just the right place.

I just need to varnish the parts that should be shiny, and it'll be perfect! 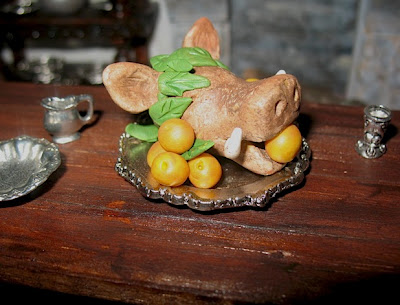 Posted by The Dangerous Mezzo at 5:21 PM No comments:

Email ThisBlogThis!Share to TwitterShare to FacebookShare to Pinterest
Labels: boars head, children, do it yourself, food, tudor

Instead of decorating our real house this Christmas, we're going to decorate the Great Hall of the dolls castle in Tudor style! To that end I want to: 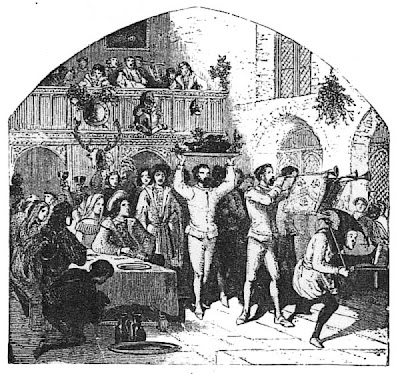 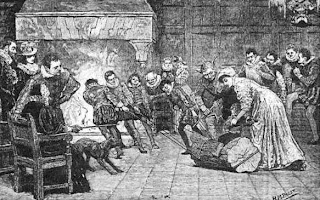 Posted by The Dangerous Mezzo at 4:21 AM 2 comments:

Back in October I started to teach myself to do needlepoint, using Sandra Whitehead's book Celtic, medieval and Tudor wall hangings in 1/12 scale needlepoint.  The kids and I have since been involved with various projects, and this is the one I've been working on since the middle of October: 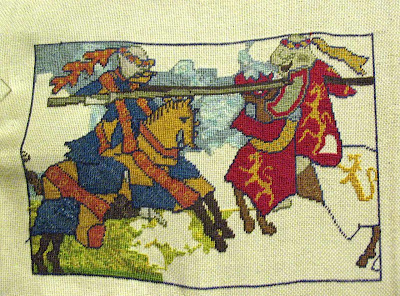 (I've had it stretched on a few types of frames, so it's a bit skew-whiff :) I'll have a lot of blocking to do when it's finished!)  It's based on one of Whitehead's very attractive counted patterns, is done in stem stitch on 22 ct canvas, and I've added a few elements.  In the original the background is solid cream colour stitching -- I've replaced that with sky and grass using a combination of solid and ombre floss.  I also made the red knight's shield more obvious and added plumes to each knight's helmet.  I've still got a lot of stitching to do, but when it's done, it will probably hang in the Great Hall (since it's too big for any other room we have so far :)

This is a photo of the original, from Whitehead's site: 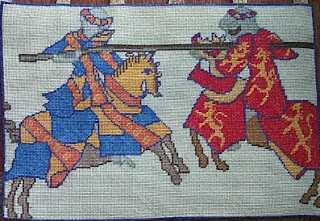 I'll add some photos of the kids' stitching as soon as I can -- they've done amazing work.  Very neat indeed!

Posted by The Dangerous Mezzo at 8:14 PM No comments:

Email ThisBlogThis!Share to TwitterShare to FacebookShare to Pinterest
Labels: do it yourself, embroidery, needlepoint, tapestry

I bought some inexpensive windows from Little Dollhouse Company back in October -- they had removable acrylic glazing, but it as pretty bland and rectangular.

Although the Tudors did use small rectangular panes of glass in some of their windows, diamond panes are more characteristic of the style, so I decided that my castle inhabitants had redone the windows in the Tower in contemporary (Tudor) style. 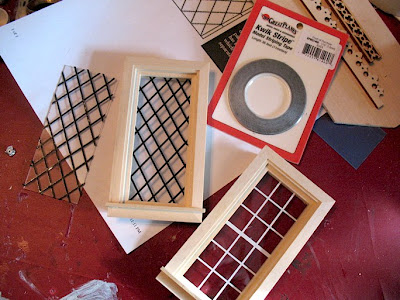 Here you can see the window I bought -- lower right.  I cut a new pane out of a clear plastic sheet (.030" thick) I bought at my local radio controlled aircraft modelling shop.  Then I applied 1/16" black pinstriping I bought at the same model shop -- a relatively pain-free way to add leading to a plain window pane.

The end result looks pretty good, I think!  I will paint the frames a stone colour to go with the walls.  (I realize that the side I've got showing inside is meant to go outside, but I like the sills, so I'm doing it backwards -- I'll add some bland molding on the outside of the castle to tidy things up there.) 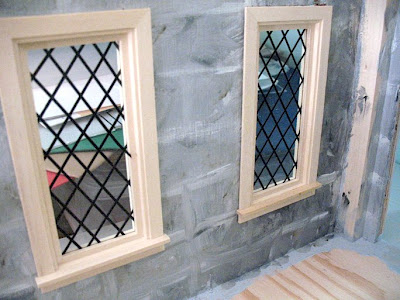 Posted by The Dangerous Mezzo at 12:30 PM No comments: