I still have to put the lead caming on the windows in the bedchamber and paint and frame them, and the Tower needs a roof and a few more light fixtures, but it's almost done! 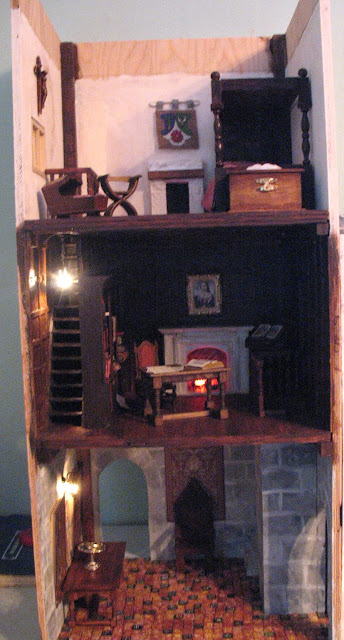 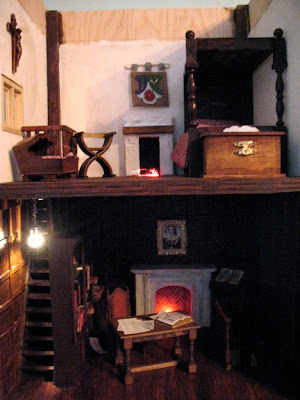 I haven't really finished dressing the bed, but this is a start.  The little cradle I bought used from an eBay seller. I love the X-chair -- again, from an eBay seller.   The tapestry over the fireplace was my first embroidery.  The crucifix is a resin pendant.  The trunk is from Michaels. 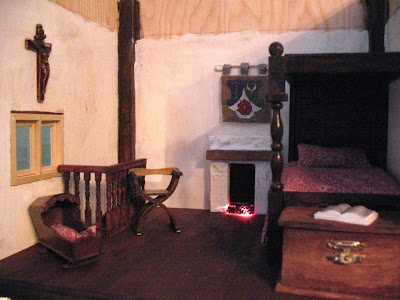 Well, I'm now starting on the final room of the first Tower:  the bed chamber.  I've done the floor, the stair railing, painted the walls and done a teeny tiny little fireplace. I built a wooden frame and used poly filla to make it look plastered.  Then I pressed a stained beam into the "plaster" for a mantelpiece. 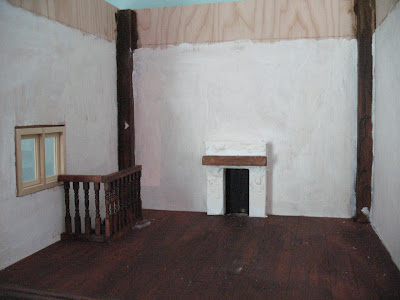 Posted by The Dangerous Mezzo at 2:38 PM No comments:

Oh, I'm really enjoying this!  As I've mentioned before elsewhere on this blog, I love dolls house lighting -- it just makes everything come alive for me.

I added a lantern in the enclosed stairwell behind the bookcase and wired up the logs/flames unit in the fireplace. 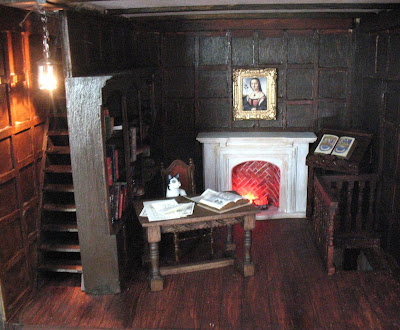 This is the best looking fire I've ever found! 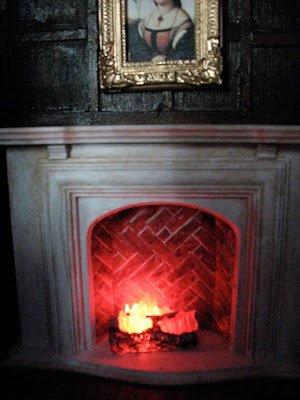 After a few days hard work on the Library, it's almost finished.  I just have to decide how I'm going to light it and drill and connect everything, and it'll be done!

Here you can see the bookcases, the fireplace mantle, the book stand and my new table and chair.  The panelling took a while, but I really like it! 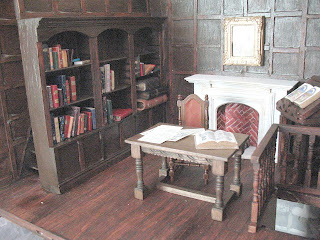 This shows the fireplace in greater detai, plus the painting I hung and the lectern.  The logs/fire in the fireplace I bought from eBay seller Kerby Lane Miniatures. 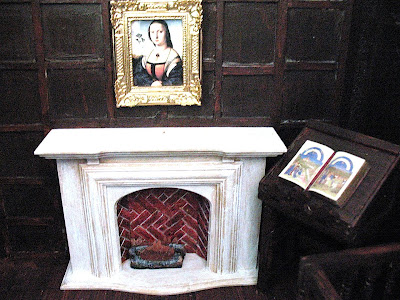 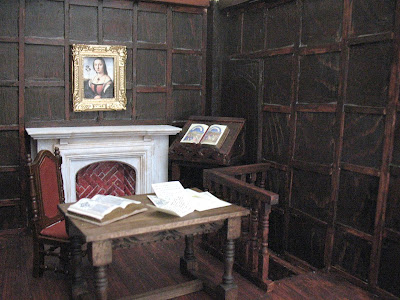 I bought the small packet of papers you see here in closeup on the libary table from the same UK miniature maker (Pear Tree Miniatures)  who made the Tres Riches Heures open book you see in the above photo, on the lectern.  This Tudor package includes a map, two letters and a list of household accounts. The open book on the table is one I made. 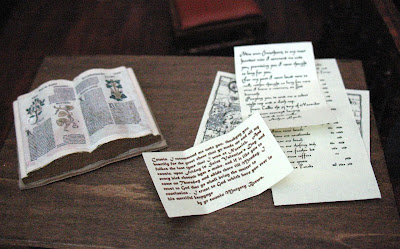 Here's a photo of the library table I bought from UK eBay seller amd5758 who offers free shipping anywhere in the world!  I've bought a couple of pieces from her now and they're all superb. 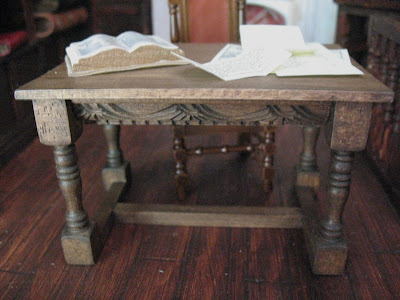 New chairs for the castle

I had several parcels arrive today, one of which contained a set of four chairs.  Now,  the chairs are definitely NOT Tudor (they're Stuart, at the earliest, with really ugly white upholstery), but I'm going to use a couple of them temporarily in the castle until I get my Jacobean house going :)

I bought them in spite of the upholstery on them, in the hopes that I could perhaps recover them.

It took a little more prying than I thought to get the padding off, but in the end brute force won :) 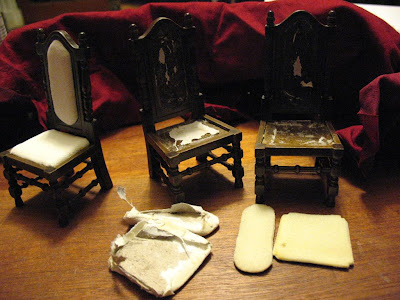 Here are three of them:  the one on the left with upholstery intact, the one in the middle with it freshly pulled off, and the one on the end with the old fabric removed from the thin cardboard and foam backing.

After playing with a few different fabrics and leathers, I've chosen to cover two in a soft brown leather and two in a very pretty, tiny red pattern.  Here they are! 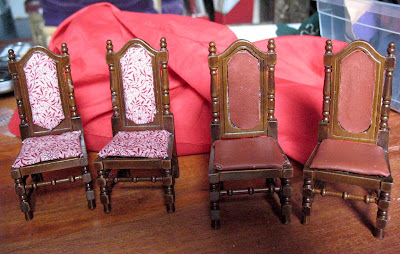 Posted by The Dangerous Mezzo at 8:21 PM 2 comments: